What a weird year!

31 December 2020
Community
2020 for Rust
It's obvious this year sucked pretty bad for most people. The Rust team was very fortunate to have already been set up to remotely keep "business as usual" throughout the pandemic. We've made a ton of changes, added new content, and released a few DLC packages all without skipping a beat. We try to stay humble but this last week the Rust scene has been buzzing and I feel like we can give our horn a little toot. There's no denying Rust is a fairly hard game to stream. More so if you don't know all the tips and tricks to minimize stream sniping which is obviously something you learn over time and by communicating with other content creators. We had a big week over the Christmas break. If you're not familiar with OfflineTV (OTV) it's a group of some of the biggest streamers that all live together. Last week they all decided they were going to give Rust a try with a private server. Folks like that don't get the luxury of playing on normal servers without complete chaos blowing it up for them and severely altering gameplay. 25 nakeds outside your base screeching down their mic kinda kills the vibe. Anyhoo, they put up their own server to minimize infiltrators. Unfortunately, the server info was leaked and things got hairy. At that point we reached out and offered to help set up a proper server and educated them on how to hide the info. Turned out to be a huge success! Rust quickly became #1 on Twitch for a few days in a row. We were basking in the spotlight for a minute :)

They ended up inviting hJune and he was an amazing mentor to them. Shroud got hooked. Hutnik put together a video of Valkyrae doing Oilrig for the first time and it's tons of hilariously confused screeching and team kills.

Seeing all the big streamers trying out @playrust is something amazing, haven't had that much fun watching Rust in a while. @Valkyrae's first time on Oil Rig is the funniest thing ever. I'm glad they are all having fun even tho... it can get chaotic at times 😂 pic.twitter.com/Wxr1raclxd 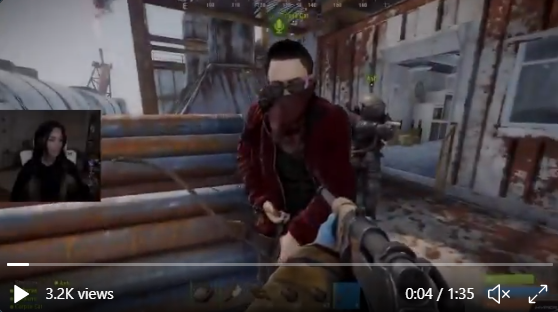 With that said we do acknowledge some areas we can improve on for both gameplay and streaming. Back to work!
Oh we also made Steam's 2020 list of both "Top Sellers" and "Most Played" ;) TOOT TOOT!

thumb_up0
thumb_down0
The Murders at Blackpeak

Tonybuttface started a new murder-mystery series set in the early 1900's. Edit is fantastic and it really does grab you by the brain. His teaser trailer is here and worth the watch. Without further ado: Episode 1 We'll be sure to keep up with Arthur and his gas.
thumb_up0
thumb_down0
Creator Rewind
riZZa made a 2020 Creator Rewind to finish the year off with a bang! He offered up a wallpaper used in it too you can download.
thumb_up0
thumb_down0
Jingle Jam
Yogscast did a holiday special of a full blown roleplay prison escape and then working for the mayor? Settle in, it's a long one!
thumb_up0
thumb_down0
Alistair's Head
I'm just going to leave this here. I may try and throw this on the cinema server if there's enough interest. You know, for science. ...if he doesn't murder me first.
thumb_up0
thumb_down0
January Update & BP Wipe
Just to clear up some confusion the January update (on the 7th) will also include a BP wipe. After the recent rework of the workbench tech trees we felt it was warranted for a clean slate.


If you're a server owner and extremely adamant about keeping blueprints you can still do that by renaming your BP save files after the update.
thumb_up0
thumb_down0
Show me the stuff!
If you made something cool or saw something cool, reach out! Tag me on the Twitterverse or u/ErrnieGerrn Reddit.
Cover art by Shhlie! He does stream his artwork on occasion!
Happy New Year!!!! <3
thumb_up0
thumb_down0