26 July 2021
COMMUNITY
Rust Map Maker Competition: Winners
Back in May, we announced the first official map making competition, to allow map makers to flex their skills, show off to the wider Rust community and win some prizes in the process. With 24 submissions, I've been extremely impressed with the creativity. It was a close-fought battle to pick the winners, ultimately choosing the winners came down to the final polish and balance of the maps. Some key areas which let some maps down and decided the winners were the following: Here are a few screenshots I took along the way while evaluating the submissions.

The winning entry was submitted by a team that are well known in the Rust mapping community and have a ton of experience under their belt. Huge congratulations to Lone, WhoisMikeJones, CollapsedOrange and Nox for their submission "Gravis Island". I picked Gravis Island as the winner because it kept true the original goals of the competition and the overall polish and balance felt higher than the competition, I tried to find any faults within the map but there wasn't much I could find to critique. The team elevated the Rust world by many custom points of interest, unquie terrain and built upon existing monuments which I'm excited to see how players respond to. 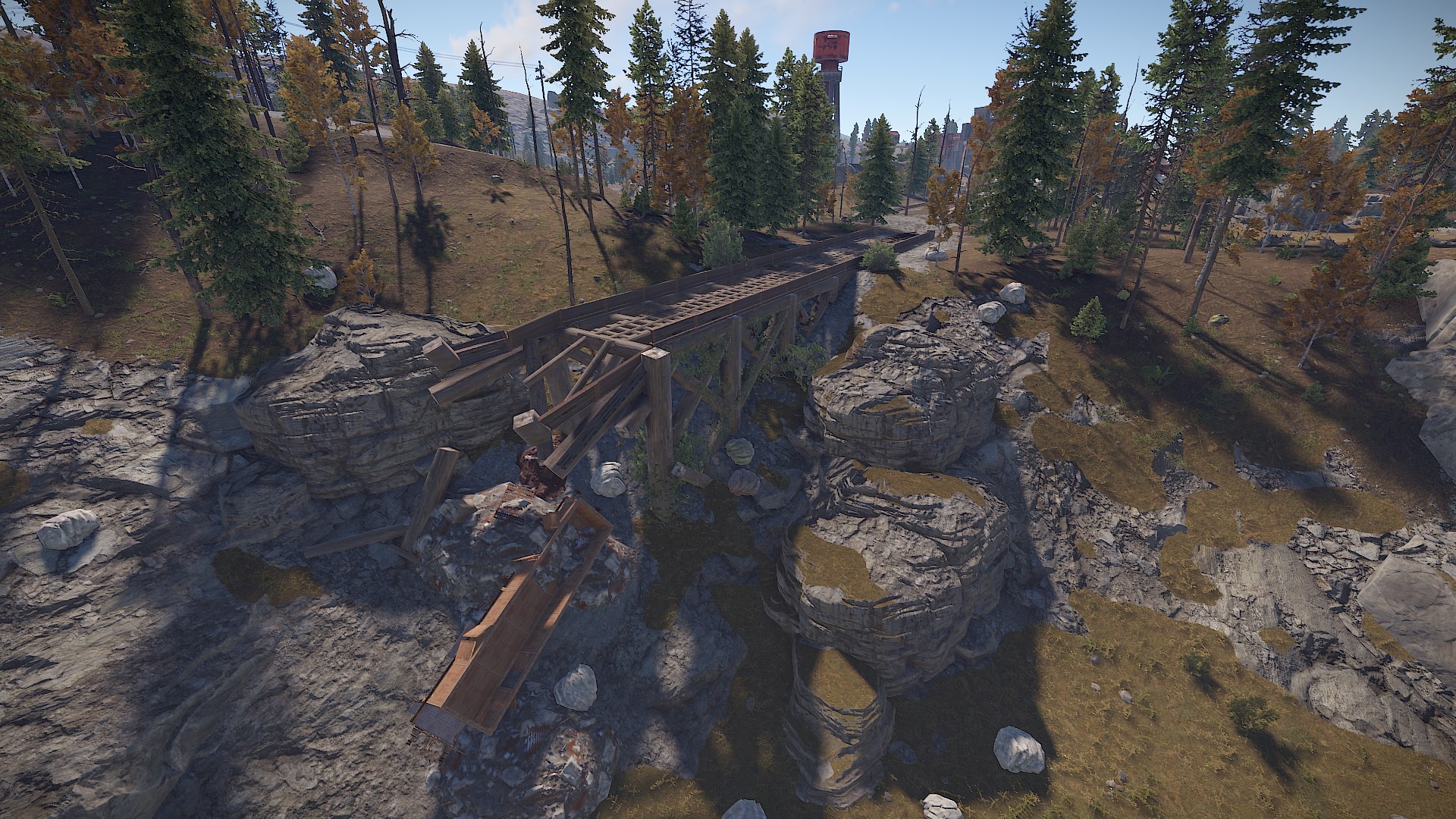 What is Gravis Island? I'll let the map creators explain:

Gravis Island was developed with the intention of creating a familiar Rust experience while expanding on the idea of focusing on in-game items that are currently underutilized. Everything that has been placed on this map was handdone by four veterans in the Rust Map Making scene. This experience was more than just making something fun for players, but a great team building experience where we got to know each other more and shared some great laughs along the way. The map we made has some small additions to monuments we feel could help increase foot traffic, while also giving more reasons to explore more of the map. We implemented a network of mountain tunnels to allow the players to traverse the landscape in an easier way, with small wooden bridges, military checkpoints and more. To prepare for the future submarine update, we instituted ocean based monuments players could visit on their explorations out at sea. Just adding new content wasn’t our only focus, user playability, performance, and progression was a key component in our initial planning stages. We conceptualized many mockups of different styles of maps until our team felt we had something that was balanced. Our progression begins on the south west of the map and cascades to the north east. As a player moves from one side to the other, they will be met with better tier monuments and more difficult challenges along the way. The map also features a handful of various islands that players can travel to if they prefer the more secluded lifestyle. Every aspect of this map was handcrafted from beginning to end. We are very proud of what we accomplished in the two weeks we worked on this together and had a wonderful time making it.


Gravis Island will be running on Facepunch EU Small 1, 3, 6 and US Small 1 and 3 from August 5th. This will be the first time we've run custom maps on our servers and excited to read player feedback.

The runner up submission I found to be the most interesting map submitted but fell short on polish and attention to detail, it's a map I'd love to run on our servers one day with a few tweaks. Huge congratulations to FireCr0w and his submission "Cacatúa". 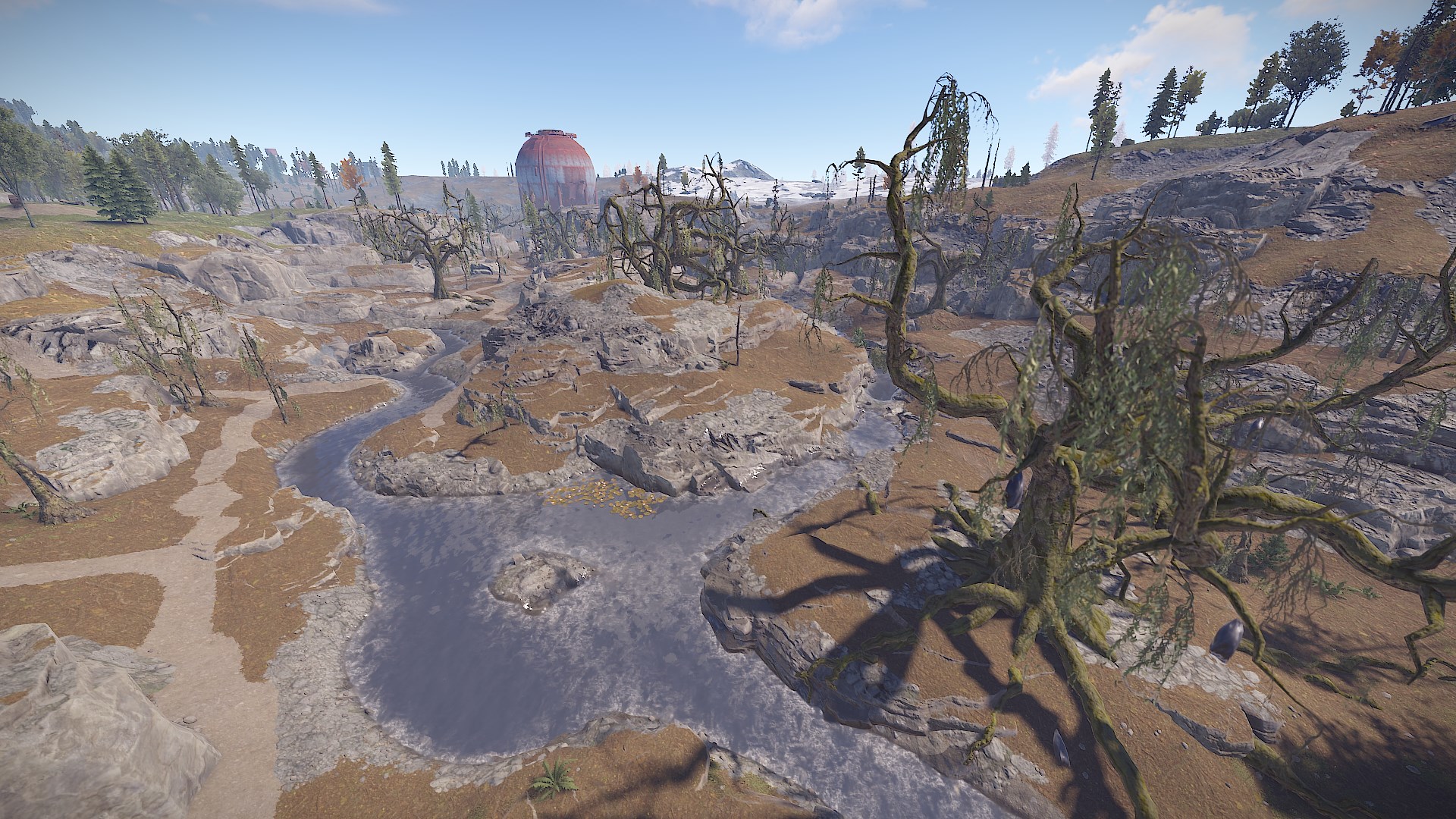 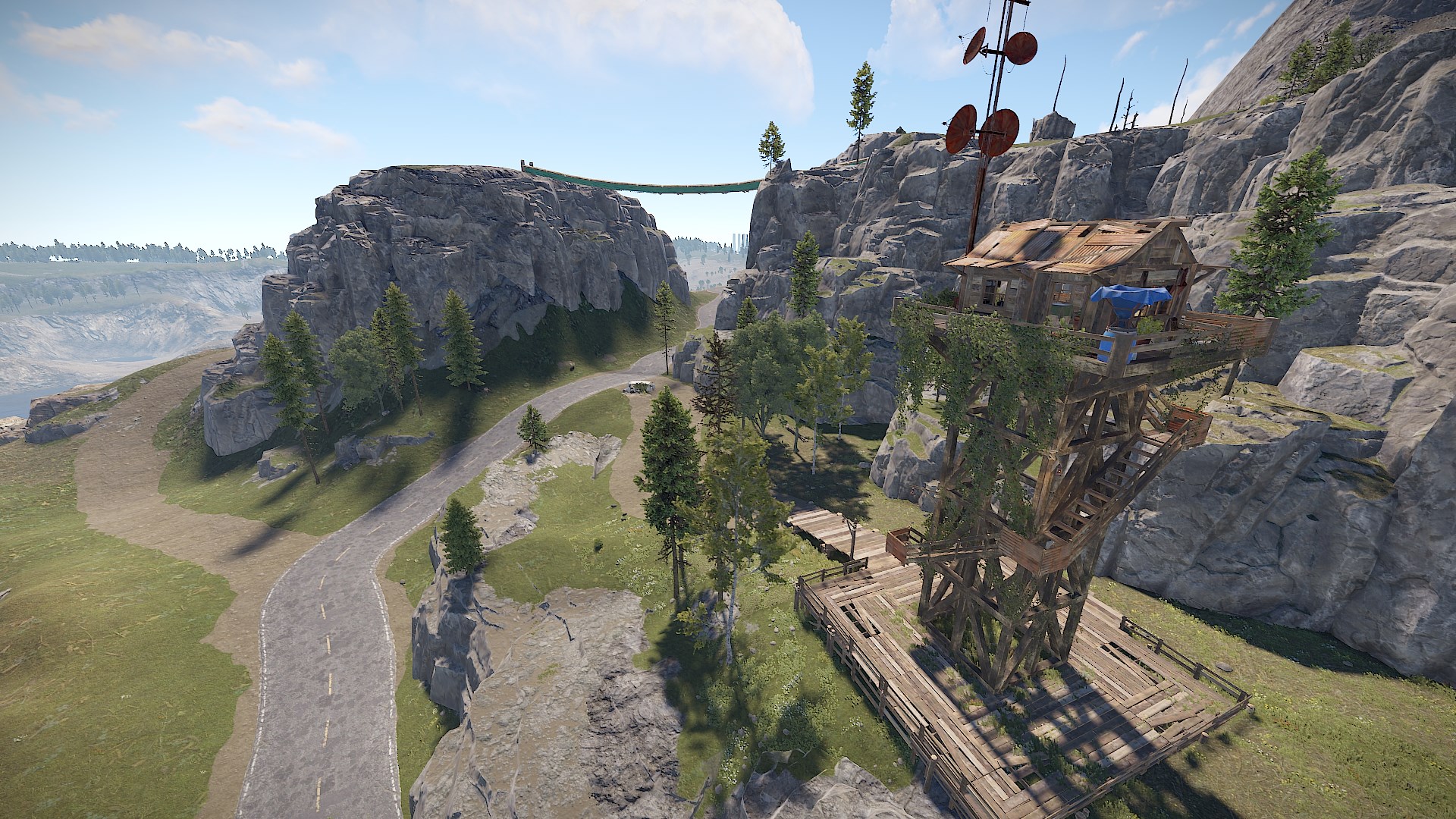 Words and screenshots can't truly display the true magnitude and effort gone into creating these maps but luckily Shadowfrax has posted a fresh new tour video brewing, to be published this week. We'll update you more as that releases. I'd like to say a huge thank you to everyone who submitted a map, the talent within the Rust mapping community is impressive. Without a doubt, we'll look at continuing these competitions going forward, mix up the prize pool and use 4-4.5k maps for the big boy servers.
thumb_up10
thumb_down1
Reporting Tools & Censorship
Lets talk about the less than desirable side of online gaming:
Cheaters & toxic players.
Over time we've noticed many players just simply are unaware of the tools available to them to help mitigate the impacts of "just internet things".

First we'll start with
muting other players
. You do have the power to mute individual players. If they're typing or saying something you don't like or agree with just mute them! :)

Simply click on their name in chat to get an array of options (Mute/Report/Steam Profile, etc). Muting a player mutes both text AND voice.

In the event they are not typing in chat you can still mute them via F1 console if you have their steam ID via
If you've set it right, chat will provide feedback that you've muted the player.
EZPZ

Reporting comes in a variety of flavors from Feedback, to Bugs, to Cheaters. Bugs and Cheaters tend to be the most popular but using this form ensures whatever you're trying to report goes to the right place.
F7 is the one stop shop for all reporting. 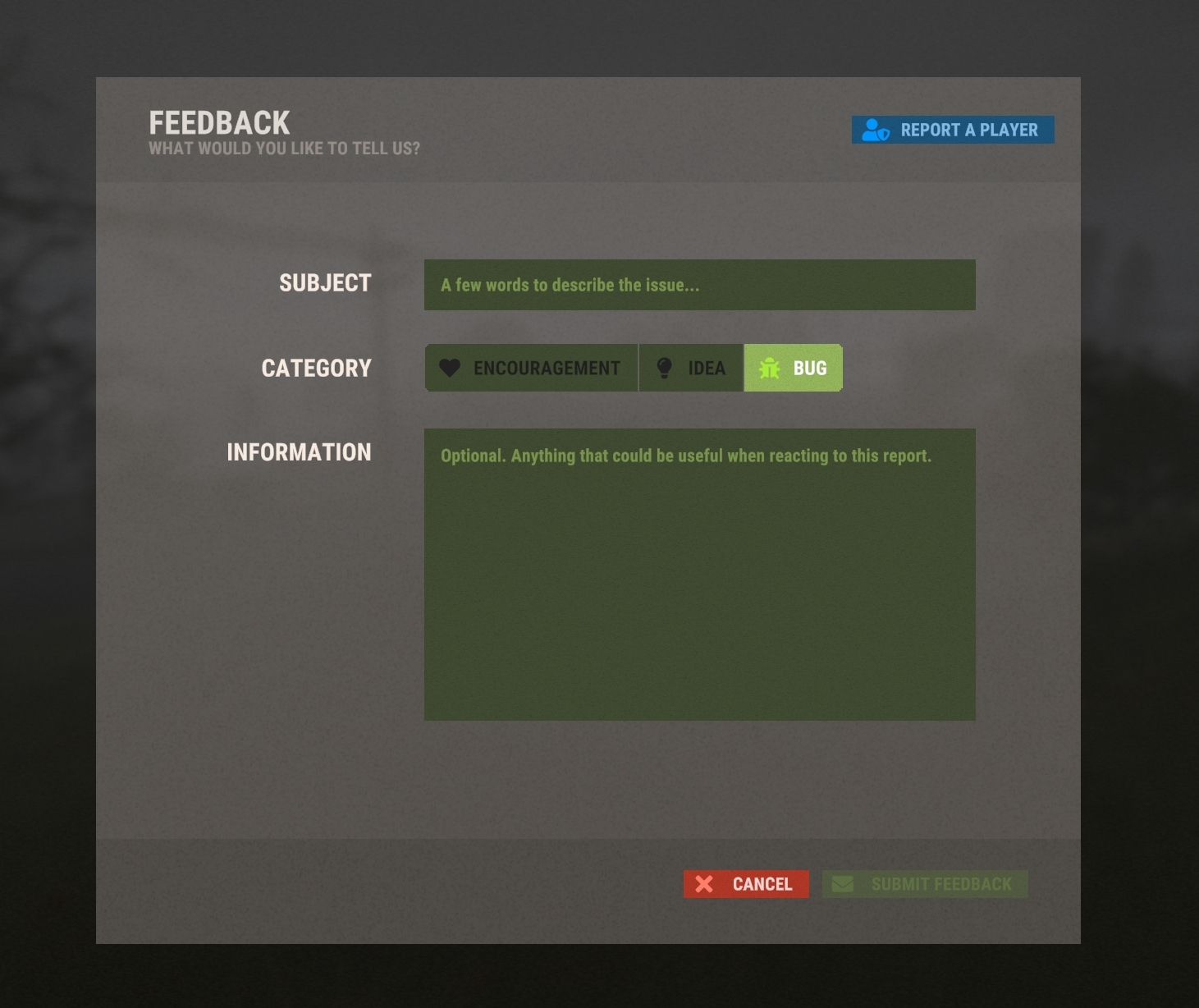 Here you can link related clips or image URLs that would be helpful in handling whatever it is you're reporting.

Worth mentioning there is also a setting in your game config to turn signs on and off if you don't like seeing all the rocket ships.
thumb_up8
thumb_down1
Creator Spotlight
This month we've got a familiar zergboi chad Tacularr! "I originally got into Rust when it first came out on Steam, Back then in 2013 there was no game like Rust. It was fresh and it got me hooked straight away. Years later with many hours sunk into the game I decided to upload a few PvP videos just for fun. What started out as a hobby turned into full-time content creation. The PvP videos turned into full-blown Clan Wars. Showcasing the high-octane Clan Wars that Rust has to offer. Big online raids, Big defenses. Huge clan fights...you name it. " I think most would just log off if they saw that coming. gg Make sure you tell him he's pretty.
thumb_up6
thumb_down1
Weed Farming DJ's
Our local weed farmer boys are back with a Night club edition. Looked like a good time till the party-pooper Jimbo showed up. Can't take that guy anywhere.
thumb_up3
thumb_down0
Raditia Commercial
Just be careful of the explosive diarrhea side effects.
thumb_up1
thumb_down0
Discord Bots & Scams
Don't get scammed! No legitimate company will spam DM's telling you that you won giveaways you never entered, or to offer you Twitch drops. Just be mindful of these and always read the URLs carefully. Most of these bot scam's entire purpose is to steal your Steam account. They are often tailored to appear legit and to specific discords or community severs too. Just block these and move on. Discord also has privacy settings to disallow DM's from people not on your friends list. This is a good way to stop them. It's become a bit of its own pandemic. Just be careful!
thumb_up9
thumb_down0
Show me the stuff!
If you made something cool or saw something cool, reach out! Tag me on the Twitterverse or u/ErrnieGerrn Reddit. Cover art by v3ebz and Veysel Kara!
thumb_up7
thumb_down0