This month we launch the Softcore Gamemode to soften the Rust experience for those that want it, a new automated drone delivery service for your vending needs, work on the Hapis revamp as well as the usual fixes and improvements.

04 February 2021
devblog
thumb_up0
thumb_down0
Softcore Gamemode
A major part of Rust has always been its hardcore, ruthless PvP and will continue to be. But we're aware that some players want a less brutal experience (sometimes, anyway). Introducing Softcore mode - a new game mode in Rust, aimed at more casual players. Don't worry, the majority of our servers will still be regular vanilla Rust (hardcore). During this first pass, you will find the following changes on Softcore servers:

10 new servers will launch with this update and run Softcore mode. We believe this is a good starting place for a more casual mode of Rust and we will continue to iterate and improve on it moving forward. 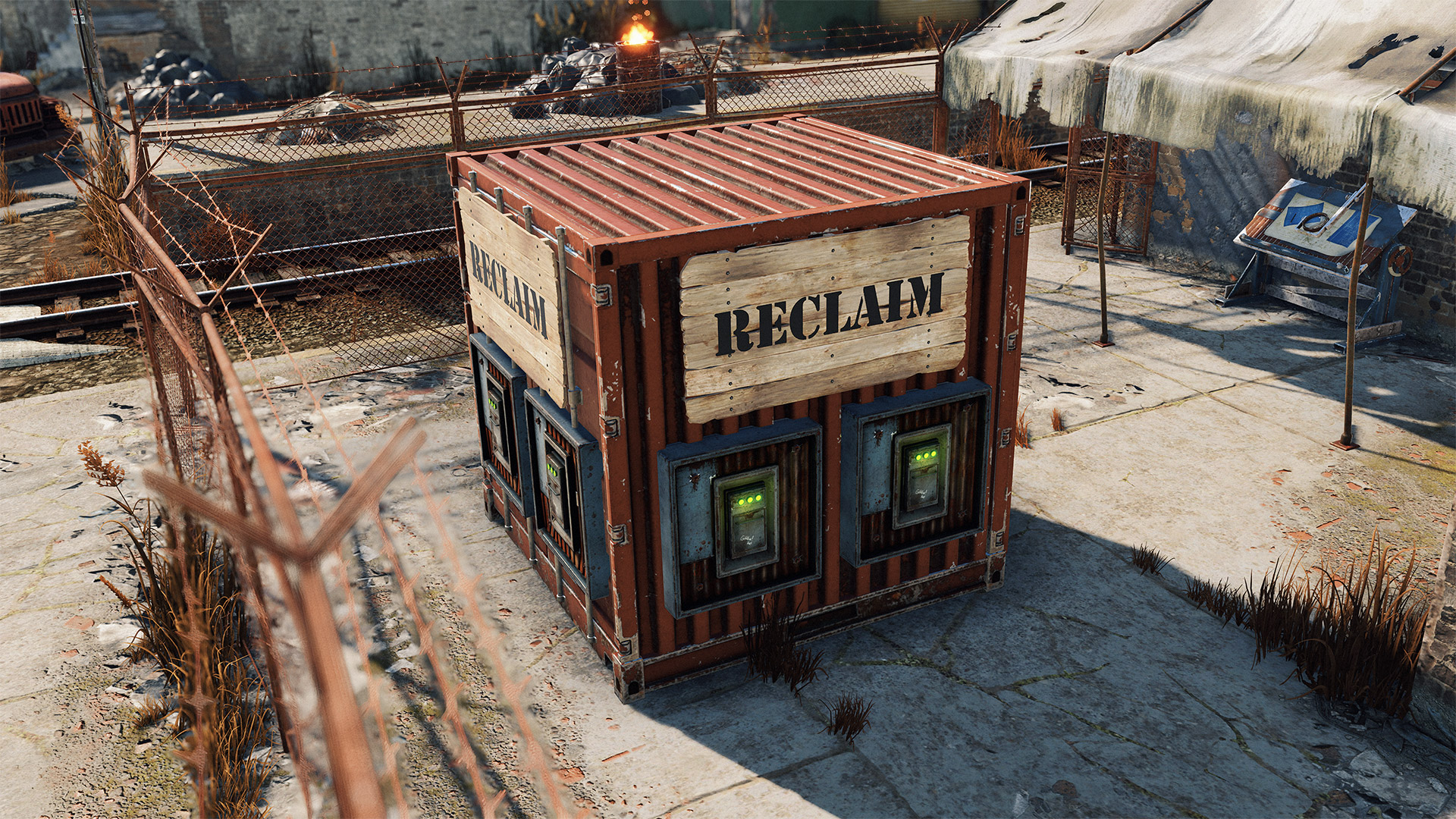 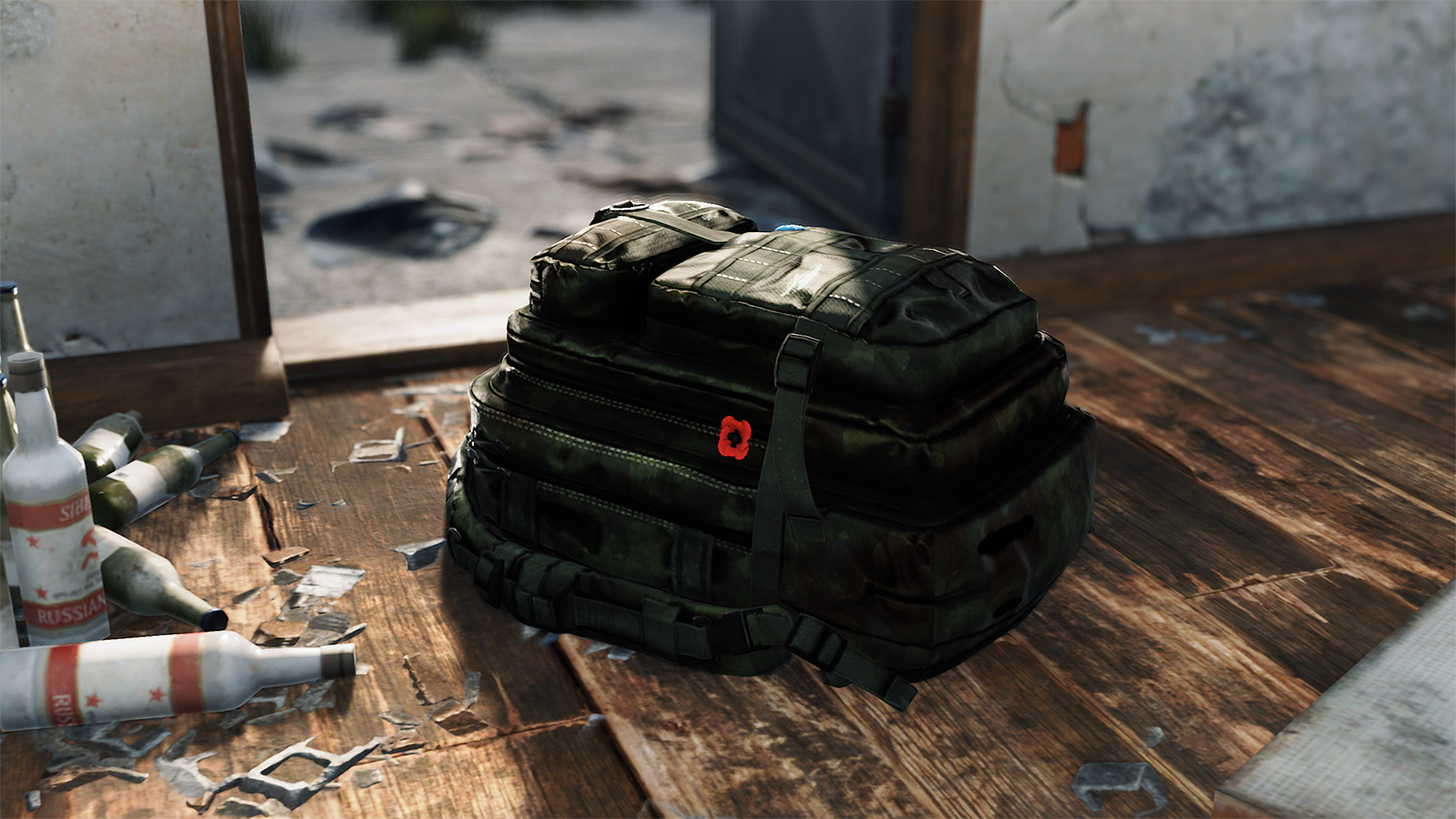 thumb_up0
thumb_down0
Marketplace
Marketplaces are a new addition to the Bandit Camp and Outpost monuments which allow you to order items from vending machines and have them delivered to you by drone. Simply choose an open terminal, click on a vending machine, and then place your order. 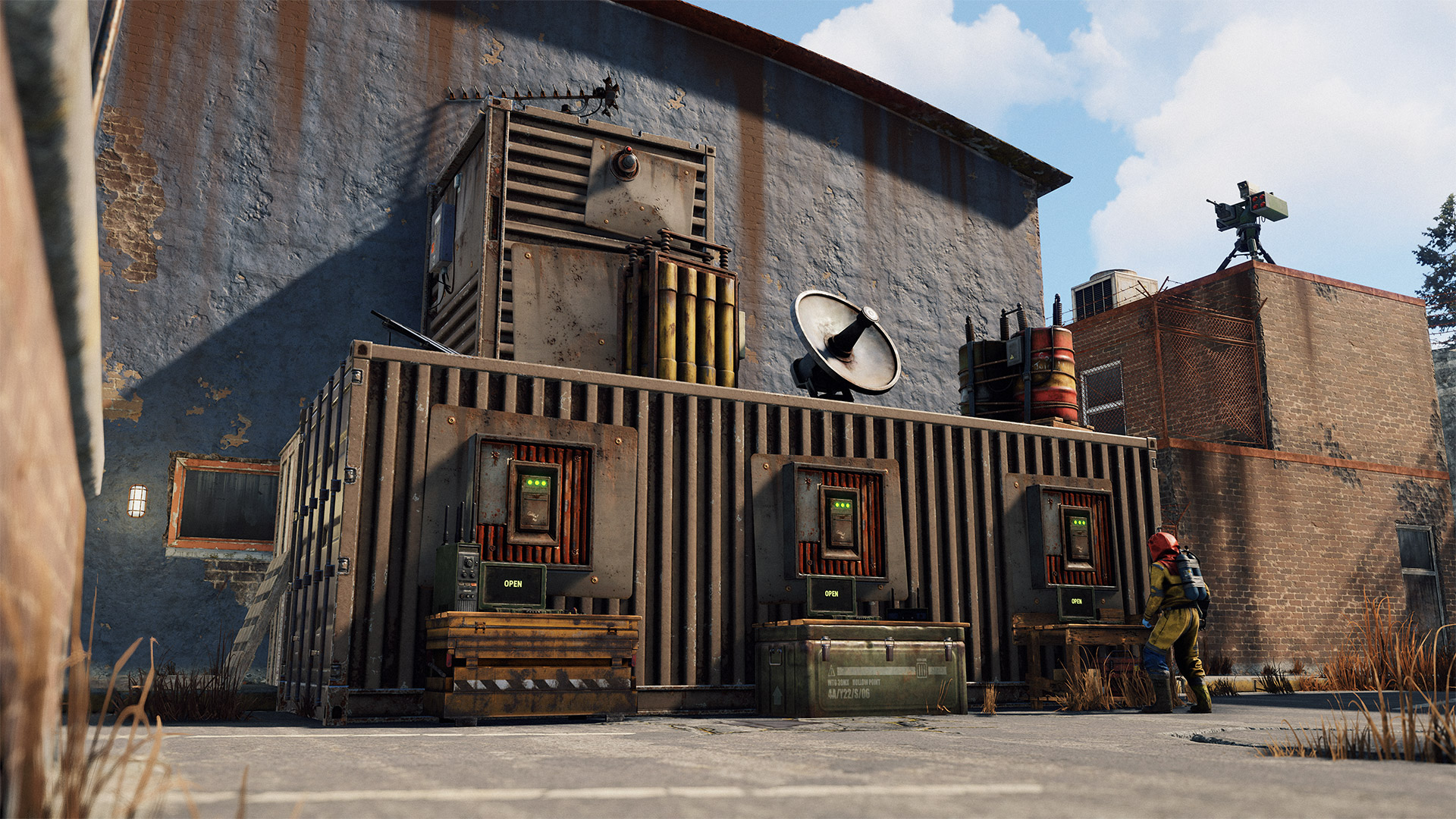 You'll need to pay a delivery fee of 20 scrap for each trade made and wait for the drone to come back with your items. It may take up to five minutes to receive your items depending on how far the drone needs to go. Make sure you take your items - the terminals are only locked to you for 10 minutes! You can place orders at any public vending machine and all NPC shops. However, vending machines which are not in an open area will not be reachable by drone. 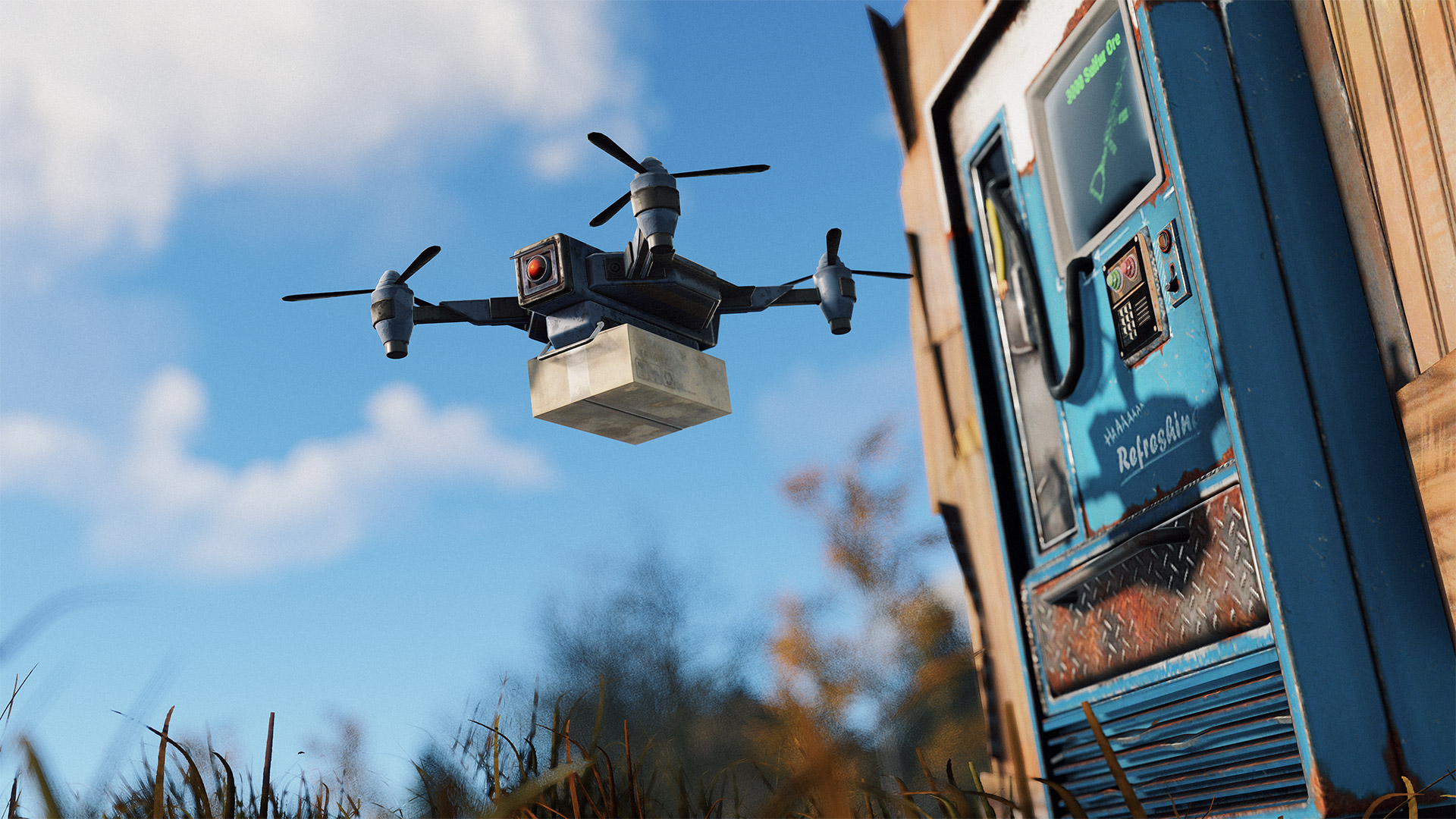 The overall goal of the marketplace is to make trading safer and encourage more trading in general. This means the delivery drones cannot be destroyed or interfered with.
thumb_up1
thumb_down0
January 2021 Review
Entering 2021 Rust was on track to have its most successful starting month to date, we were not quite prepared to have the player base double within 4 days. Thanks to Twitch and YouTube creators, particularly OfflineTV and Egoland this caused a huge surge of new players shooting Rust into Steam's top-selling game globally over consecutive days. Here are some of January 2021 statics:

Here are some of Rust's lifetime stats as of January 2021: 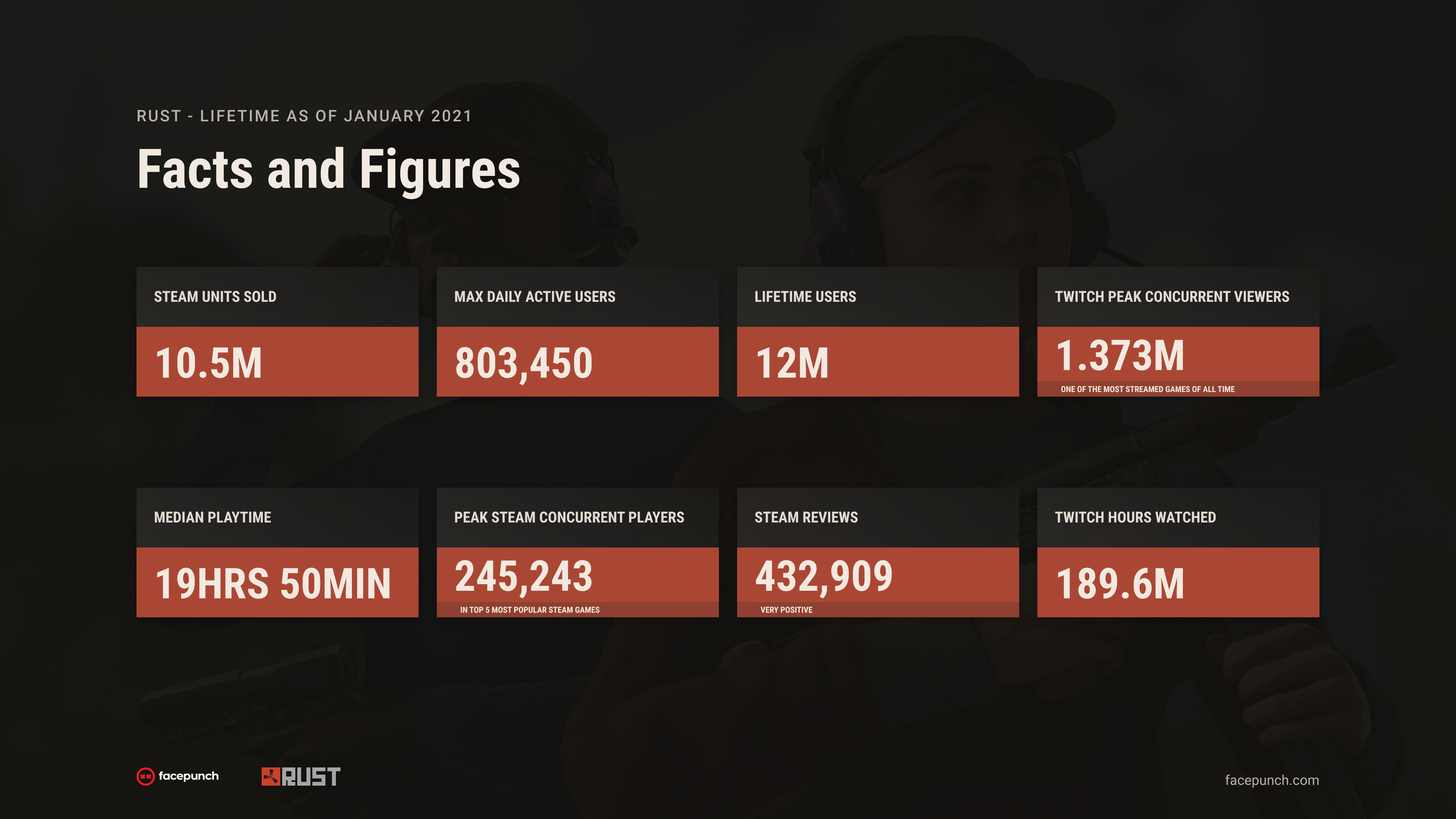 It's not all roses and rainbows when you have such a sudden boost in popularity. You start seeing cracks forming in the foundations, most noticeable for us the server browser was never intended to handle such a large amount of servers. Without going into the technicality this has resulted in many servers not displaying for users and causing a lot of frustration for server owners. We're currently working on and exploring solutions so please bear with us. Anticheat also has fell victim to the spike In popularity. We're continuing to work with EAC and reviewing our efforts. During January we surpassed half a million banned accounts in total. We issued six hotfixes to tackle several cheat related exploits, today's patch will contain further anticheat measures.
thumb_up1
thumb_down0
Hapis Island Revive
Hapis Island just received its single biggest update to date. It was just a few months ago that we had plans to retire it, but after further deliberation we decided it would be a shame to cut it off, seeing as a static map still offers a unique experience.

It is important to note that this is only the first phase of a larger revamp, so here is a list of some of the changes going live now, in addition to things you can expect to change at a later date:

We've teamed up with Welyn, hJune, Lifestomper, Posty, Coconutb, Hutnik, Ray_c, Sequisha, Mister Flak and Krissy to bring you special unique drops which can only be earned by watching their channels Learn more at twitch.facepunch.com. 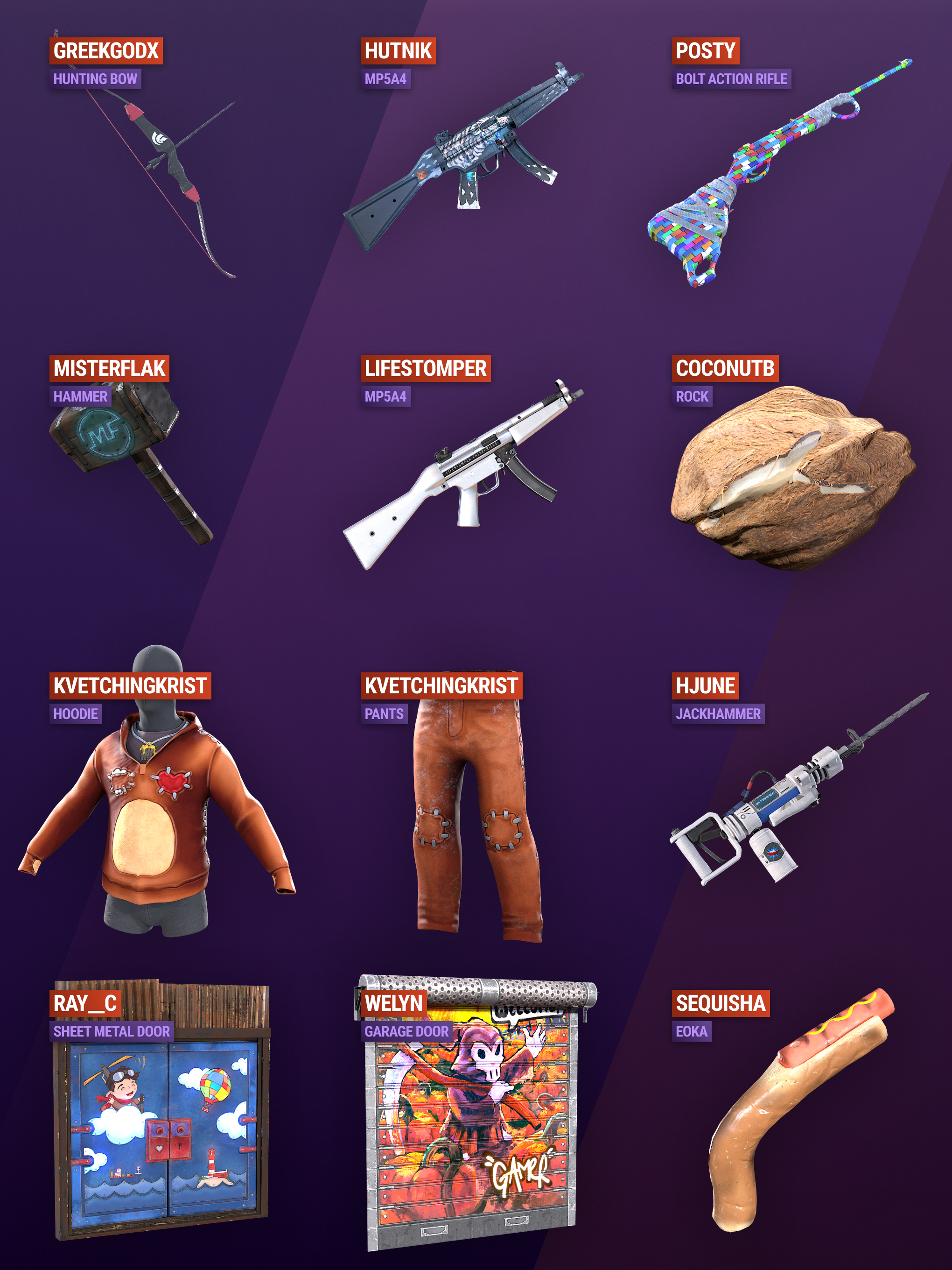 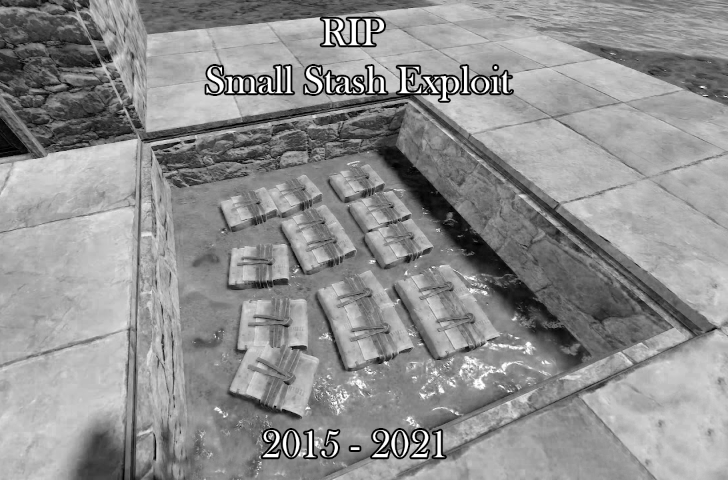 Building overtop of stashes will now destroy them. This means you can't hide your loot under foundation blocks anymore. If you really want to spend 4 hours chopping trees and placing triangle foundations everywhere so you can find someone's secret stash of 12 animal fat, a hunting bow and a torch, that is something you can now do.
thumb_up0
thumb_down1
Server Tags

The server browser will now show tags specific to each server. The goal is to make it easier for users to find a server that they're interested in. It might also clean server names up a bit (hopefully). This came a bit last minute so there's currently no way to filter the list by tags but we will definitely be doing this in the future. Server owners can find more information on how to use server tags on this wiki page.
thumb_up1
thumb_down0
Quality of Life
A few new QOL features are worth highlighting: Keylocks now auto-lock when deployed, there's a new "Suicide" option added to the escape menu and auto turrets will now auto-reload after adding a weapon or ammo.
thumb_up1
thumb_down0
Giving Back - $431,535.38
Towards the end of 2020 we helped support three great charity events: Movember, Trust in Rust and Charitable Rust. Thanks to people like yourself purchasing in-game skins and fake moustaches, Facepunch donated a total of $465,876.13. Including the community contributions, this brings the overall amount raised to $633,497.10! All the money raised will help aid mental health, suicide prevention, cancer and more. Huge thank you to everyone involved, we look forward to raising more in 2021.
thumb_up1
thumb_down0
Patch Name Softcore Gamemode Update
Changelist Title 238
date_range Thursday, February 4, 2021
add_circle